Injured due to an electric shock at work?
An experienced personal injury solicitor can let you know within minutes if you are entitled to make a claim for compensation
Can I make a claim? How much can I claim?
How Much Could You Claim?
Homepage > Accident Types > Work Accident Claims > Electric Shock Claims

Many electrical faults are caused because of faulty equipment or because of a responsible party’s breach of their legal duty of care. Electric shocks can cause significant physical and psychological damage, and victims are legally entitled to claim compensation for their losses and suffering.

The following guide provides information for anybody who has suffered an electric shock, no matter how severe, and how they can access the compensation that it rightfully theirs.

What are the symptoms of an electric shock injury?

Electric shocks can vary in strength and so the symptoms that are suffered by a victim will also vary in severity. Even low electricity volts can cause an injury to a person, with 50 volts still capable of causing damage to the brain and muscles. Injury solicitors have successfully secured compensation for many electric shock victims, and some of the most common symptoms that are presented include:

In the most serious cases, the electric shock can prove to be fatal, which is referred to as electrocution. 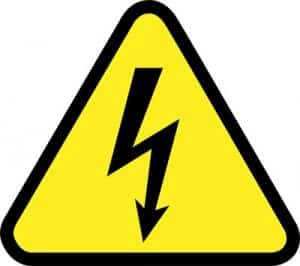 As well as the physical symptoms that are presented, many clients have suffered psychological or emotional injuries as a result of the electric shock. Whether the shock has caused anxiety, confidence issues, Post Traumatic Stress Disorder (PTSD) or emotional stresses brought on by the inability to work or perform daily tasks because of the shock injury, the psychological impact can be significant.

How can it be proved that somebody else was liable?

It is unreasonable for anybody to suffer physical or emotional damage following an electric shock caused by somebody else and so compensation can be claimed for a number of causes. It is the job of your solicitor to demonstrate who was liable for your injuries and make them accountable for the breach of the duty of care that they owed to you.

Some of the most common environments in which electric shocks happen because of the fault of another person include:

In each of the above settings, others are legally responsible for ensuring the environment is free from risk and that adequate protection is offered to others. If this legal duty has been breached, you will be able to claim personal injury compensation for your pain and any any financial losses incurred as a result.

Electric Shocks in the Workplace

There are a number of potential causes for electric shocks in a work environment, and employers are legally required to follow the guidelines set out in the Health and Safety at Work Act 1974. This means that the employer must carry out regular risk assessments, make provisions for any dangers found, and any worker who is at risk of suffering from electric shocks should be provided with suitable Personal Protection Equipment (PPE) by their employer.

Some of the most at-risk jobs for electric shocks include:

Electric Socks in the Home

Faulty products can cause electric shocks in the home and if you were using the equipment as advised but an error in the product caused the shock, you may be eligible to claim against the manufacturer. Some of the most common causes of home electric shocks include:

Further risks can be caused by faulty maintenance work to property, and we have processed claims from homeowners who have suffered electric shock injuries after negligent building work in their home. Errors in electrical wiring can cause serious and sometimes fatal damage to a person, and the electrical engineer can be held accountable for their dangerous and negligent work.

Poor maintenance and substandard electrical wiring can cause severe electric shocks to people whilst on holiday. A hotel has a legal duty of care to its guests, and if you booked your holiday as a package deal with an ATOL registered company, you could be eligible to make an electric shock injury compensation claim under the Package Travel Regulations 1992.

Owners of any public space such as a shopping centre, leisure facility, entertainment venue or public toilets have a legal obligation to provide a safe and risk free environment for visitors. If you have suffered an electric shock because of a fault in equipment, building construction or facilities in a public space, you will be eligible to make a claim for compensation.

The owners of these spaces are legally required to hold public liability insurance, and this ensures that they are covered in the event of anybody suffering an illness, injury or other loss in their setting.

How much compensation will I be awarded?

The amount of compensation that is awarded to you will depend upon the severity of your symptoms and any long lasting impact that the electric shock injury is likely to have on your life. In determining the severity of the shock, the following will be considered:

Your solicitor will take great care to fully understand the level of suffering caused to you by the electric shock, and will be committed to demonstrating the severity of your symptoms to secure the highest award amounts possible.