Armed Forces Compensation
If you have sustained an injury whilst serving in the armed forces, you may be entitled to claim compensation
Can I make a claim? How much can I claim?
How Much Could You Claim?
Homepage > Accident Types > Work Accident Claims > Military Injury Claims

A career in the military is amongst the most dangerous and risky jobs that a person can undertake. That said, all armed forces personnel are entitled to protection from the military against unnecessary risks and where possible, the army, navy, air force and royal marines must eliminate dangers posed to their men and women. Just like other employers, the armed forces are legally obliged to provide as safe a working environment as possible and employees in this field should be able to rely on regular risk assessments and effective safety measures.

In previous decades, it was incredibly difficult to present a claim for compensation against any of the armed forces whilst remaining as a serving member. However, current legislation means that those in the military are now able to access compensation for injuries, illnesses and losses incurred as a result of their occupation, without the risk of negative impacts on their career or working conditions.

Laws are in place to protect those who want to claim compensation that they rightfully deserve. The Armed Forces Compensation Scheme enables serving soldiers, sailors, airmen and marines to feel secure in the knowledge that they can access compensation in incidents where the military are liable for injury or illnesses sustained.

Did you know that between April 2005 and September 2013, over 21,500 claims were successfully processed through the Armed Forces Compensation Scheme.

Can I make a claim against the military for compensation?

The armed forces, like all employers, have a duty of care to their employees to eliminate and minimise unnecessary dangers and risks to health and safety. If the military has breached this duty and you have suffered an illness or injury as a result, you may be eligible to make a claim for compensation.

To be successful in your case, your solicitor will need to prove that the Ministry of Defence was at fault for your accident and that this accident resulted in the injuries you have sustained. This will normally be achieved through the process of gathering evidence from medical experts, witnesses and other sources.

How do I make a claim for compensation against the military?

Any member of the armed forces who has suffered from an illness or injury whilst serving in the military is legally entitled to seek compensation for damages and losses. The options available for military personnel to make a personal injury claim are somewhat different to standard methods seen for other workplace accidents.

For a member of the armed forces to claim compensation for injuries sustained during service, there are two different options that can be taken. They are: 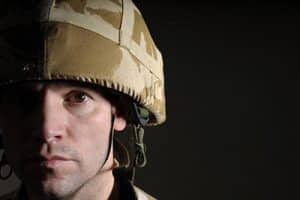 The AFCS processes claims without you having to prove who was at fault. This means that if it is difficult to prove who or what caused an accident and subsequent injury or illness, the AFCS may still be able to process the claim. The only requirement under the AFCS is that the claimant can clearly demonstrate that his or her injuries were sustained during their service for the military.

The alternative option available to military personnel is to pursue a civil claim. As with all other civil claims for personal injury, such as road accidents, slips and trips and medical negligence, the claimant would need to prove that they were owed a duty of care and that a breach of this duty of care was the cause of their injury or illness.

It is technically possible to make a claim via both routes, although claimants should be aware that this would not result in two compensation payments. Instead, the highest of the two amounts awarded would be paid to the claimant.

An experienced and knowledgeable solicitor will be happy to assess the details of your case during a free consultation. They will offer you expert advice as to the likely success of making a claim and recommend the best route to take based on your circumstances.

Are there any time limits for making a claim?

There are different time limits in place for initiating an accident claim for compensation against the military, which will depend on the route you choose to follow.

The time limit for beginning a claim through the AFCS is 7 years from the date of the incident that caused your illness or injury. If however an injury or illness is not diagnosed or linked to your military service until a later date, there is then a 3 year time limit which begins from this date.

The AFCS only processes claims for illnesses or injuries that have been caused since 6th April 2005.

If you decide to make a civil claim for your military accident, then just like other personal injury claims, you will have three years from the date of the accident to begin your claim. If the injury or illness is diagnosed at a later date, the time limit begins to count down from the date of knowledge, i.e. when the injury is diagnosed. You can find out more information about the time limits for making a claim here: How long do I have to make a personal injury claim?

What amount of compensation will I be offered?

The amount of compensation that is awarded will depend on a number of factors. Firstly it will depend on the type and severity of the injury you have suffered. The more severe your symptoms are and the greater the impact the injury has on your life, the higher the compensation amount will be. Secondly, the damages awarded will then depend on any financial losses you have sustained as a result of the injury. This can include being reimbursed for medical expenses, loss of earnings and future earning, related travel expenses and damage to personal property.

In order to support your solicitor in this task, you will be asked to provide as much information and evidence as possible. This includes records and reports of the incident, medical evaluations, treatment information and if possible, witness statements and photographic evidence. Once your solicitor has built a strong case to support your claim, they will negotiate a settlement award of the highest possible value on your behalf.